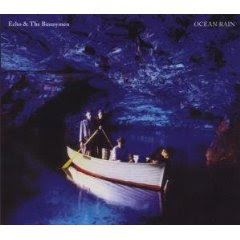 ** NASA Astronaut to Take All-Time Fave Album to the International Space Station **
Move over Star Trek . Echo & The Bunnymen’s 1984 album Ocean Rain will boldly go to the International Space Station on June 13th courtesy of astronaut Colonel Timothy L. Korpa.
Korpa, who has been a Bunnymen fanatic since his teens recently contacted the band via their website about his upcoming three-month mission on the ISS. Though Ocean Rain is Korpa’s favorite, he gave the choice to the band to pick which of their albums they would like him to take on his mission, saying that he would snap photos in space with the album and crew of the ISS and give the album back to the band as a souvenir when he returns to Earth. The Bunnymen ecstatically shipped out to Korpa an autographed copy of Ocean Rain right away.
"What an honour," said Echo & The Bunnymen’s Ian McCulloch. "Now it’s official. We are the coolest band in the universe. As a kid I dreamt of being an astronaut, and now in a way it feels like I’m fulfilling that dream. I cannot wait to hear from Tim what it is like to listen to ‘The Killing Moon’ in the actual glow of the moon."
Posted by FISH nor FOWL... at 06:03