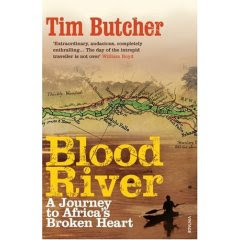 Tim Butcher’s book has divided opinion since it was published in 2007. Richard and Judy loved it, or their researchers did, and made it one of their featured titles. That, in turn, took it to the top of the bestsellers list, but I’m not sure whether it was entirely warranted. Basically it’s two books in one. First off, it’s the story of Butcher’s journey along the Congo river, recreating Henry Stanley’s trip a hundred and thirty-odd years earlier. The differences are startling. Stanley took 999 days, travelled mainly by foot or dugout, and the death toll amongst his colleagues and porters was considerable. Butcher relied on hitching lists with the UN and various charities, didn’t move a click under his own auspices, and moaned constantly all the way. The man has no sense of humour at all, and any attempt at levity from whichever Samaritan has taken pity on him is, at best, met with confusion. There’s no getting away from the fact that it was still considerable achievement travelling through a huge area where the concept of law and order is long forgotten, armed militia are out to kill everything that moves and, as Joe Strummer so succinctly put it, ‘every white face is an invitation to robbery’. Still, no need to be such a fuckin’ grump about it. The book’s other aspect is a serious attempt at explaining the history of this huge African country. Some of his conclusions are puzzling, but it’s still a well informed piece with plenty of first hand insights into the ongoing tragedy which is The Congo. He’s in the Middle East now. I doubt he’ll find much to chuckle about there, either.
Posted by FISH nor FOWL... at 02:42